Miss Svea Kline was a native of Sweden who came to the United States in 1928 with her twin sister. She began attending art schools, and eventually became a sculptor and artist of renown.

Miss Kline started the Sculpture Department at the Flint Institute of Arts in 1943 and began teaching there. The Flint Elementary Principals Association and Oak Grove Teachers Club commissioned this series of tiles depicting six classic children’s subjects from Miss Kline and then donated the tiles to Flint Public Library. They were installed in the Children’s Room when the original Kearsley Street building was built in 1958.

The tiles represent the following subjects:

When we began the demolition of the Library, we knew that these tiles were a treasure that we did not want to destroy.  However, the work to preserve them was costly because they were built right into the wall, and the wall needed to come down.

The Community Foundation of Greater Flint also recognized the value of this artwork and gave a grant to support its preservation through the Flint Community Fund, Kommareddi Family Fund, and the New Opportunities Fund.

The section of concrete wall into which these tiles were installed was extracted and then safely re-installed in the new Children’s Learning Room. Now this significant and beautiful piece of local art history will continue to be enjoyed by future generations. 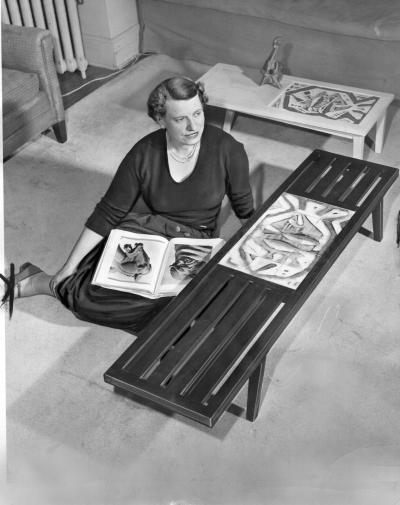